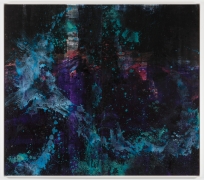 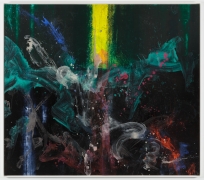 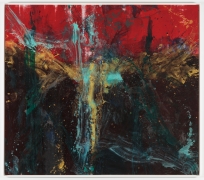 Myungwon Kim was born in Seoul, Korea in 1983 and currently lives and works in Los Angeles, CA. She received her BFA in Printmaking from Maryland Institute College of Art in 2007. Kim spent one year at Tamarind Institute, where she received her Professional Printer Certificate in 2008. She then went on to receive her MFA at Tyler School of Art, Temple University in 2010. Kim utilizes her training in Printmaking, using its processes, techniques, and materials to create her large-scale gestural works. Using Mylar as her preferred substrate she investigates medium and the color black by building layers of varied media. Her spontaneous execution exposes the use of her limbs as her mark making tools. In 2011, Kim’s work was purchased by the Cummins Station’s permanent collection in Tennessee and included in group-exhibitions at the Torrance Art Museum, CA and The Danforth Museum of Art, MA. She has also exhibited work in group shows at the Palos Verdes Art Center, CA (2010); Hunterdon Art Museum, NJ (2009); LA Municipal Art Gallery (2009) and the Tamarind Institute Gallery, NM (2008). Her solo exhibitions include Mulpa Space, Seoul, Korea (2007) and Temple Gallery, PA (2010). Kim has been featured in the publications California Contemporary Art (2011), Kyung Hyang Art Wave Magazine (2011), American Contemporary Art (2011) and New American Paintings (2011). In addition, her work has been reviewed by The New York Times (2009) and The Segye Times (2009).