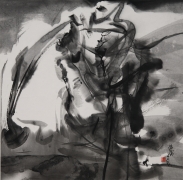 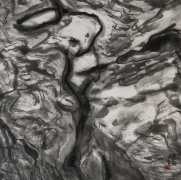 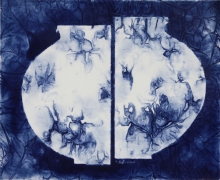 Born in Quanjiao, Anhui province in 1960, Gan Daofu has emerged as a leading voice in the development of contemporary Chinese ceramics. Receiving his M.A. from the Jingdezhen Ceramics Institute, Daofu studied blue and white porcelain under its director Qin Xilin. Going on to found one of the first contemporary ceramicist associations in China – Ice Blue Art – Daofu has gained since a reputation as a pioneer in modern under glaze painting. Currently the Art Director of the Jingdezhen Academy of Blue and White porcelain and an instructor at the Jingdezhen Ceramics Institute, his works has been exhibited in solo and group exhibition throughout China. Lavishing rich washes of pigment upon traditional baluster, ‘champion’, and square vase format, Daofu exploits the splendor of Kangzi’s 17th century court to create a vivid modern dialogue